Warning: 5 Things You Should Not Do During 911 Calls

4 Global Emergency Numbers – Which Number Do You Call?

When To Call Emergency Services In Relation To Your Neighbors?

Did you know that nearly a billion smoke and carbon monoxide detectors are installed in homes and businesses across the United States?

The purpose of this army of smoke detectors is to make an effort to be proactive in staving off disaster and emergency calls.

Half of the country is required by law to make carbon monoxide detectors a standard feature, a trend that will continue to spread.

Well over half of the fire-related deaths that occur in the nation can be blamed on faulty smoke detectors, indicating that there is a need for innovations from creative minds. 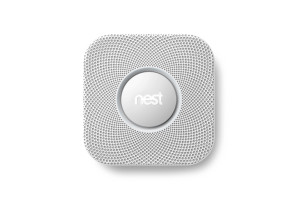 In a quest to reduce the number of 911 calls, one company is rising to the challenge.

The NEST smoke alarm is breaking new ground, paving the way to fewer emergency calls thanks to improvements that will make others take notice and could revolutionize the industry.

NEST Labs, based out of California, developed their new concept for a smoke alarm with comprehensive features, built to be more effective in sending out that first danger warning while not being a nuisance.

Recognizing the fact that many 911 calls and fire disasters result from smoke detectors that fail to function, the company wanted to rise to the occasion and introduce a product with built-in safety features.

One of the biggest problems responsible for thousands and indeed millions of emergency calls around the world is smoke alarm battery failure.

My key recommendation to you is to change the smoke alarm batteries twice a year, typically when the clocks are changed in the fall and the spring.

However, in reality, most people forget! This means in most homes the smoke alarm batteries may not be in great shape.

Thanks to researchers at NEST, the NEST smoke detector will actually announce that there is cause for concern and clarifies what the issue is.

Most alarm systems simply release a piercing shriek when there is a problem.

However, if the batteries are ineffective, there will be no warning.

The NEST smoke alarm on the other hand makes people aware that it’s time to check the alarm system before disaster strikes. The founders of the NEST smoke alarm began business by concentrating on thermostats and saving energy for consumers.

However, their company evolved and branched out into the area of smoke and carbon monoxide detection, seeing a need for improvements.

Chief executive Tony Fadell wanted to take it up a notch when thinking about the vision for his company.

It was time to do more than save money for his customers. He wanted to have a part in saving lives, minimizing the need for 911 calls, and tragedies.

He recognized the fact that faulty detectors could lead to dangerous situations in which homeowners no longer believe that alarm when it sounds or remove the batteries in moments of frustration.

The end result is another emergency call and another tale of loss, whether it’s property or lives.

NEST labs decided they could do better. So the company recently launched the ‘NEST Protect’, which includes the latest developments in technology to provide homeowners and business owners with a new level of protection.

It provides the peace of mind that comes with a quality device that works efficiently, seamlessly informing consumers of any problems that should arise with the system itself or when there are fire-related threats.

Here’s a close-up look at ten cool NEST smoke alarm features that could save your life and avoid future 911 calls.

THE NEST ALARM STAYS CURRENT WITH THE TIMES 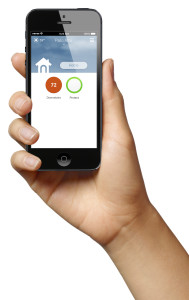 The makers of the NEST smoke alarm realize that most people nowadays are tied into mobile devices.

Thus, when the alarm is sounding or the batteries are low, a message will be sent to your mobile device.

Rather than waking you in the middle of the night with that aggravating low-battery chirp, you’ll be alerted in a timely manner and be able to take care of the problem.

It’s a convenient feature that can be established through a free NEST account, effective as long as Wi-Fi is available in your home.

Useful functionality when away from home because you’ll be alerted to problems and can immediately request the emergency services.

THE NEST SMOKE DETECTOR SENDS OUT AN EARLY WARNING SIGNAL

Before danger strikes and smoke or carbon monoxide levels are creeping up, the NEST alarm system sends out a first warning sign.

Residents or commercial owners can respond, investigate if there truly is a problem, and take care of matters before a full-blown emergency takes place.

REST ASSURED THAT ALL FUNCTIONS ARE WORKING PROPERLY 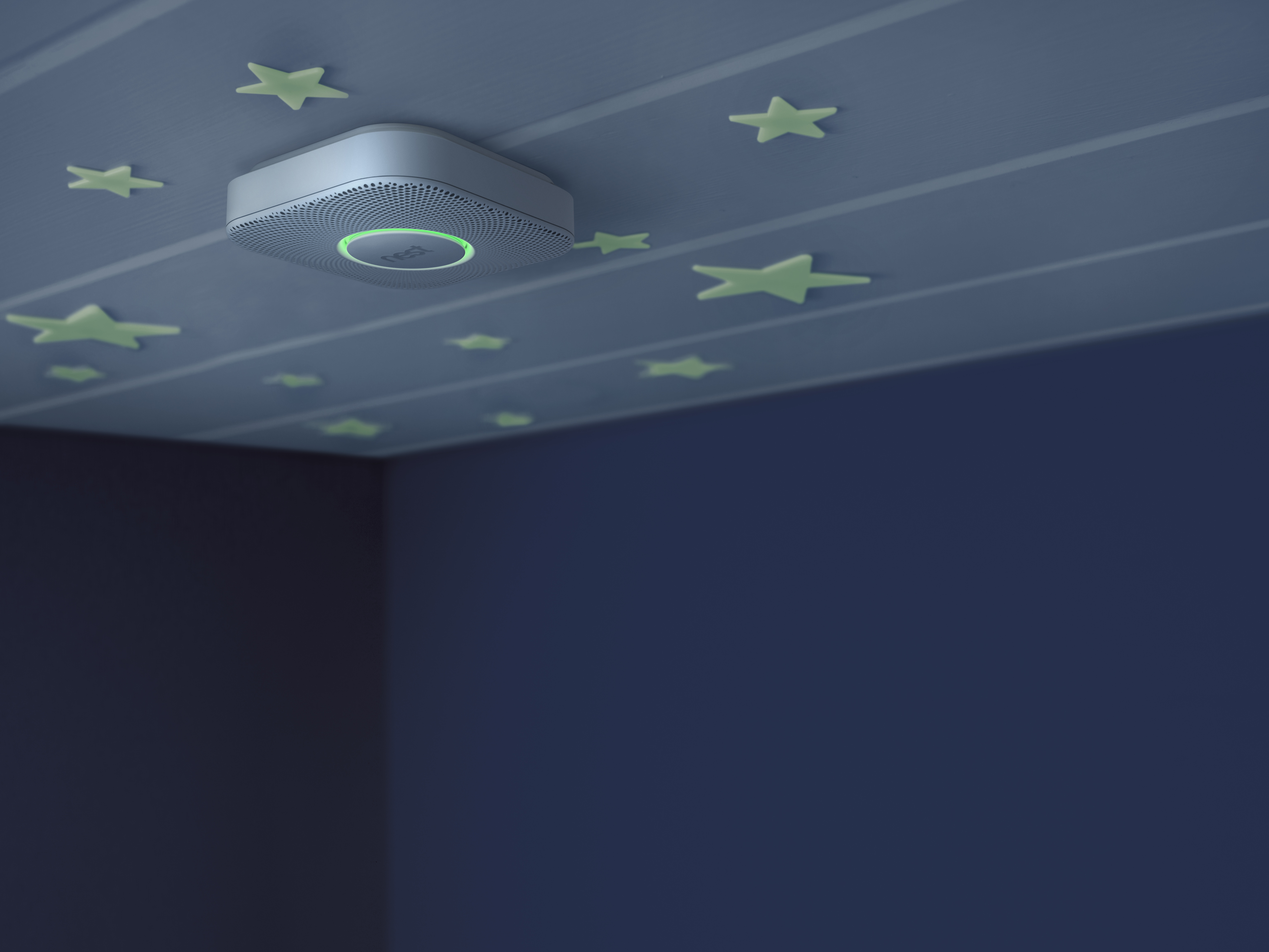 As families head off to bed each night, the NEST smoke detector has a comforting, green light that shows clearly the batteries are in order.

There’s no need to doubt the effectiveness of this advanced detector.

ENJOY A NIGHT LIGHT AS AN ADDED PERK

The NEST smoke detector comes equipped with LED lights that will actually provide enough illumination to be a night light.

It’s perfect for young children who need extra security if they should awaken in the dark.

A VOCAL WARNING IS AN EFFECTIVE COMBINATION WITH AN ALARM

Time and again, an emergency call has come in for another fire-related disaster involving children who did not awaken when the smoke alarm sounded.

No one wants to answer 911 calls to discover there has been a terrible injury or a dreadful death.

The NEST smoke detector engineers paid attention to research and discovered that youngsters respond best to a voice, particularly a female voice that reminds them of their mother.

As a result, the NEST alarm has a female voice that alerts members of the household that there is a problem, in addition to a loud alarm.

NEST HAS A WIRELESS INTERCONNECT FEATURE

Most family homes will have more than one smoke detector, while businesses have an impressive network.

NEST has installed a wireless interconnect feature, ensuring that every alarm will communicate with each other.

If there is a problem in one room in the household or business, all the rest of the alarms will sound as well.

The main point is to send out an alert to every possible area in order to make sure an emergency call will be made after everyone has made it to safety.

NEST HAS AN IMPRESSIVE COMBINATION OF SENSORS 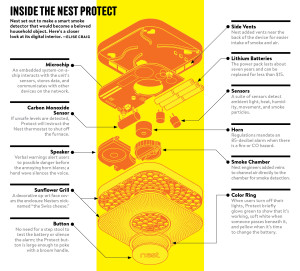 The NEST detector includes an array of sensors that provides consumers with a level of protection beyond compare.

From lighting to the wave feature as convenient additions, the smoke and carbon monoxide sensors are of the highest quality.

ENJOY THE FLEXIBILITY OF MORE THAN ONE LANGUAGE

Recognizing the fact that the United States contains a cultural blend, the NEST detector will communicate in English or Spanish.

It’s a simple matter of programming the preferred language upon installation.

THE NEST ALARM CAN BE COMBINED WITH THE NEST LEARNING THERMOSTAT

Satisfied customers will find that the NEST thermostat and alarm system go hand in hand.

Through the use of apps and the NEST account, the potential of their combined features can be maximized.

It’s an excellent addition for any residence or commercial property, well worth the investment.

Previous: Stay On The Line When On An Emergency Call
Next: Use Texting For 911 Calls